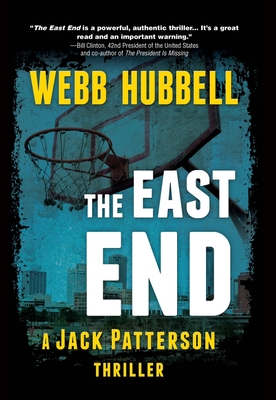 Jack Patterson returns to Little Rock at the request of his boyhood friend Sam Pagano, but when Jack arrives, he’s abducted and taken to a remote swamp where he’s beaten and lynched by men set on revenge. Clovis Jones, his friend and bodyguard, finds Jack near death and gets him to a hospital.

As Jack recovers, he learns Sam’s college sweetheart, Jana Hall, is now a doctor who established and ran Arkansas’s health clinics for the poor including one in Little Rock’s East End. Jana’s efforts stepped on the toes of some powerful people, including someone who wants her clinics shut down, her medical practice ended, and for her to spend the rest of her life in jail. Meanwhile, someone has killed the men who tried to lynch Jack, and Jack is the prime suspect in the murders.

To make matters worse, Jack must defend Jana without the aid of his trusted assistant, Maggie, and his usual co-counsel, Micki Lawrence. Jack faces an unethical special prosecutor, a judge on the take, and the shadowy power broker bent on destroying Dr. Hall and her health clinics. Why Jana has become such a target, no one seems to know. Every time Jack thinks he has caught a break or sees a way to exonerate Dr. Hall, his adversaries or his client put a new obstacle in his path, including a second killer bent on settling an old score.

Jack’s courtroom tactics fail, his client wants to plead guilty to protect her patients, and in a last-ditch effort to overcome the long odds against his client he resorts to a complicated and dangerous strategy. The strategy will either save Jana’s life and reputation, or get Jack disbarred, his client put away for life, or worse—get Jack killed.

Webb Hubbell, former Associate Attorney General of the United States, is an author and lecturer. His Jack Patterson series and his memoir, Friends in High Places, are published by Beaufort Books. His books have been honored with numerous awards, including the IndieFab awards for best novel in 2014 and the IPPY Awards Gold Medal for best suspense/thriller. He also writes a daily blog of personal meditations at thehubbellpew.com.

"The East End is a powerful, authentic thriller... It's a great read and an important warning." —Bill Clinton, 42nd President of the United States and co-author of The President Is Missing

“The East End is another in a series of amazing works by Webb Hubbell… Don’t start this book unless you have some free time, because you aren’t going to want put it down!" —J. O. Booker M.D., Former Medical Advisor to the Arkansas Department of Health

"Webb Hubbell’s The East End is brilliant and captivating. Hubbell’s understanding, use, and ability to explain the vagaries of the legal system is remarkable." —Philip J. Hirschkop, civil rights attorney

"The East End is a very well written thriller that keeps the reader on edge. As well as social commentary on health care issues of our day. A great read. I couldn’t put it down. Kudos to Webb Hubbell." —The Reverend Luis Leon, Rector of St. John's Church

"The East End was… a page turner with a fascinating courtroom segment that clearly reflects Hubbell’s legal background and expertise. This novel was particularly enjoyable for me with its backdrop of public health issues impacting low income residents." —Tom Milne, Former Executive Director National Association of County and City Health Departments

"Smart, fast-paced, and insightful, The East End delivers a heart-pounding tale with depth and nuance." —J. F. Riordan, author of "The North of the Tension Line" Series and Reflections on a Life in Exile