Cooking Like a Master Chef: 100 Recipes to Make the Everyday Extraordinary (Hardcover) 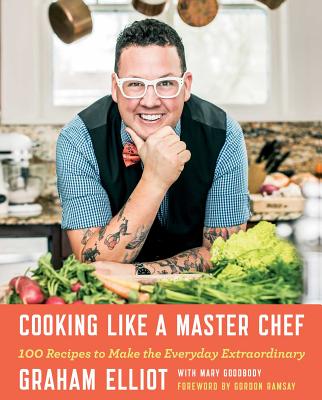 By Graham Elliot, Mary Goodbody (With), Gordon Ramsay (Foreword by)
$30.00

In the first cookbook from Graham Elliot, cohost of the popular Fox series MasterChef and MasterChef Junior, 100 deliciously creative recipes show home cooks the basics of cooking and combining flavors—and then urge them to break the rules and put their own spin on great meals.

Graham Elliot wants everyone to cook. To push up their sleeves and get some good food on the table. It’s Graham’s simple philosophy that, while there is no right or wrong when it comes to creativity in the kitchen, you will benefit from knowing some time-honored methods that enable you to serve tasty meals to your family day after day, week after week. So, to teach you his methods and infuse some fun into the process, he’s written Cooking Like a Master Chef, an easygoing, accessible guide for the home cook to create delicious, beautiful food for every occasion.

Grouped by season (without being a strictly seasonal cooking book), Graham’s 100 recipes are illustrated with gorgeous, full-color photographs and accompanied by simple, straightforward instructions—with great twists for every palate. That’s because being a top-notch chef or a talented home cook means being a free thinker, spontaneous, like a jazz musician. Cooks need to change the music every so often—once they’re comfortable with the basics—to stay on their toes and infuse their routine with new excitement and energy. Here you’ll find recipes for pork chops with root beer BBQ sauce, halibut BLTs, buffalo chicken with Roquefort cream, corn bisque with red pepper jam and lime crema, smoked salmon with a dill schmear and bagel chips, truffled popcorn, and much more. Kids will love whipped yams with roasted turkey, potato gnocchi with brown butter, PBJ beignets, and classic banana splits.

It’s no wonder so many people love Graham and his energetic creativity in the kitchen. With Cooking Like a Master Chef, now you can learn to be a skilled, resourceful, and endlessly inventive cook who makes food everyone, adults and kids alike, will absolutely relish.

Graham Elliot is a critically acclaimed chef, restaurateur, and television personality who costars with Gordon Ramsay on Fox’s hugely popular MasterChef and MasterChef Junior. He has traveled to all fifty states in search of the best food America has to offer and in 2008, his eponymous Chicago restaurant became one of fifteen restaurants in the United States to hold two Michelin stars. He has been nominated for multiple James Beard awards, as well. Graham, who used to play in a band and is a singer and guitarist in his own right, is the culinary director for Chicago's Lollapalooza. He lives in Chicago with his family.

Mary Goodbody is an award-winning writer, cookbook editor, consultant, and recipe developer who has worked on more than fifty books with many well-known chefs, cooks, and food celebrities. She is a senior editor for the culinary website Cookstr.com and is the editor and content provider for Familytime.com. She lives in Fairfield, Connecticut.

“[Chef Elliot’s] debut cookbook is a match for his quirky personality. Just as he often augments his wardrobe with a flashy bowtie and stylish eyewear, he brightens up a dish with a surprise ingredient or two. ..His musicality and love of rock and roll are apparent when he riffs on short rib stroganoff with spaetzle, wild mushrooms and peppered sour cream, or a pot roast cranked up with red pepper flakes and anchovy. And when he wants to improvise, he turns to savory homemade marshmallows, adding chive-coated ones to bisques and lavender-flavored ones to pea soup… Attention is paid to seasonality throughout…"
— Publishers Weekly

“Graham has made a book for everyone, accessible and intelligent with superb recipes that will raise your technique level, grow your confidence in the kitchen and turn you into the cook you always wanted to be at home. This book perfectly demonstrates why Graham is one of the country's truly great culinarians."
— Andrew Zimmern, chef, food writer, co-creator and host of the Travel Channel series Bizarre Foods

“Inspiring, yet straightforward and approachable, Cooking like a MasterChef illuminates Graham’s personal philosophy on food and cooking superbly, while easily imparting to readers his ability to elevate without overcomplicating the food he loves best.”
— Joe Bastianich, restaurateur, winemaker, television personalityand author of Restaurant Man

"You know those meals thatjust go POW in your mouth? The ones that make you leap up and dance? That’swhat Graham brings to the table! He’s truly a master chef who can help anyonebecome a rock star in the kitchen.”
— Steve Harvey

"Introducing this accessible collection..., chef Elliot—cohost of the popular TV shows MasterChef and MasterChef Junior—compares cooking to jazz improvisation. His spontaneous ideas and creative touches appear throughout the book’s 150-plus recipes... An inventive and satisfying celebrity chef cookbook in which hearty, classic dishes are made more whimsical. Elliot has a loyal following; MasterChef fans will be thrilled."
— LIBRARY JOURNAL